Tasting The Med, Onboard & Ashore

Wine tasting is one of the best ways to experience a new country. Whether you are on board or ashore, there are many different types of wine that can be tasted. Read more in detail here: travel and wine.

Contributing writer Bruce Parkinson is on a four-night Mediterranean cruise with Costa Cruises this week. As he sails from Barcelona to Rome, Bruce has been writing daily voyage reports to share his experiences.

The real pleasures of travel are seeing new places, meeting new people, and trying new foods. The donkey mortadella, on the other hand, was a pleasant surprise.

I was on the ‘Wine-Tasting in a Volcanic Vineyard’ excursion, which Costa Cruises’ flagship Costa Smeralda offers to passengers visiting the Sicilian port of Messina. The San Michele Estate, on the slopes of Mount Etna, isn’t just ordinary volcanic vineyard. It is one of Europe’s tallest active volcanoes, standing at over 11,000 feet.

On the San Michel Estate, there are grape vines, olive trees, and prickly pear trees.

We sat on a patio with views of vineyards, olive and citrus trees, and the towering stratovolcano after taking a tour of the lovely property. The wines were complemented with plates of cheese, cured meats, olives, and bread, as well as excellent olive oil produced on the site.

When our host came over to my table to pour, he casually remarked that the mortadella was prepared from donkey. Although the origins of cold cuts and hot dogs are always a bit of a mystery, I’ve never intentionally eaten donkey. However, everything was delicious, and the wine was crisp and aromatic.

The donkey mortadella is seen in the upper right corner.

My fellow passengers loved the trip, which brought us from Messina’s port along a beautiful coastal route with views of the Ionian Sea. Only a few kilometers distant, mainland Calabria could be seen.

On my four-day cruise, which started in Barcelona and ends today in Rome, this was the second of two excursions. The first occurred in Mallorca, a Spanish island. ‘Concert in the Dragon Caves and Majorica Pearls,’ it was called. The pearls section was primarily a shopping stop at a location where, for more than a century, fake pearls and associated jewelry have been handcrafted in a laborious process.

The magnificent Caves of Drach, however, are only around the corner and are a real jewel of Mallorca. The underground rooms were first referenced in a letter in 1338, and were completely excavated in the 19th century, showing a depth of 80 feet and a length of almost three miles.

Visitors descend steps and stroll through the beautifully illuminated area, marveling at the bizarre forms of stalactites and stalagmites that resemble Antoni Gaudi’s La Sagrada Familia in Barcelona.

The tunnel leads to a natural amphitheater on the bank of an underground lake, so the best is yet to come. A procession of three tiny boats is rowed in after the guests have been seated, one of which is carrying a classical music quartet. In an ideal acoustic setting, a 20-minute performance is played. It gave me the shivers.

When you emerge, squinting into the light, to be welcomed by an Oscar Meyer hot dog cart, the breathtaking experience is only slightly marred. However, the experience of seeing the dragon caverns – as well as the beautiful music – will stay with me for the rest of my life.

We returned to the ship and sailed past Stromboli, another active volcano on the Aeolian Islands. The population of about 500 people is crowded in two settlements along the shore, as the volcano spews smoke and fire every few minutes. It has been erupting almost continuously for thousands of years, with the most recent major eruption being a century ago in 1921.

On Stromboli, there is a volcano.

Arlecchino’s a la carte lunch was a delectable delight. The dishes are designed to be tiny so that you may try a variety of them. I began with a smoked swordfish and tuna duo, followed by a Mediterranean salad and beef ragout tortellini. It may seem like a lot for lunch, but it made me feel very at ease.

Duet of smoked swordfish and tuna

Teppanyaki, a speciality restaurant that boasts “acrobatic” cooks cooking Japanese specialities, provided a wild dinner experience. I didn’t have great hopes since I’d gone to a lot of them, mainly in all-inclusive resorts. My first impression was of poor meats and shellfish, padded out with rice, bean sprouts, and cabbage, and overly seasoned with soy sauce.

This was a unique situation. The chefs were masters at handling food and equipment, and they kept up a continuous barrage of talk and song, interrupted by hysterical laughing. COVID required the addition of glass shields, yet they did not detract from the sight.

Chef at a Teppanyaki restaurant

It’s a considerable price increase, ranging from 34 to 38 Euros per person, but it’s supper plus a performance, and the quality of the food this time was exceptional. The main course options included scallops, lobster, huge prawns, steak, and duck, as well as a vegetarian menu.

There wasn’t much time on a short trip to check out the entertainment, so after supper I dashed around to different locations to see what was available. I saw a romantic Italian singer who sounded like Michael Bublé and had a rapt crowd. Then I went to see a jazz quartet headed by a strong female vocalist. Music speaks for itself, and despite the late hour, people of various countries – and ages – were having a wonderful time.

Italian singer with a romantic bent

On Monday, I’ll finish off my reporting from the Costa Smeralda with a few additional notes about the ship, drink packages, and other topics.

Other trip reports from the Costa Smeralda may be found here:

Note from the editor: Bruce is sailing as a Costa Cruises invited guest; nevertheless, all views and opinions expressed are his own. 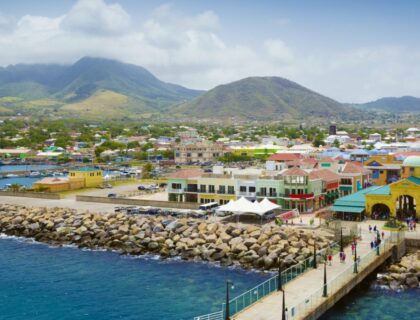