A perfect day at the beach is a common dream for many people, but what if you could design your own perfect day? This article will explore how to create your own personalized travel itinerary, with an emphasis on the best beaches in the world.

Just Another Perfect Sea Day is a blog that shares stories of people’s perfect days at the beach.

On most voyages, by day three, I’ve established a routine. I believe this is true for a large number of individuals. We walk about a new ship on the first day, feeling as though we’ll never find our bearings. On the second day, we find ourselves ready to head in the wrong direction.

“No, the Alchemy Bar is in that direction. We’ll tell ourselves, “I remember now.”

By day three, we’re comfortably wandering about the ship, at least between the areas that have become our usual hangouts.

I made it to the gym without consulting a map this morning, for example.

I had a great exercise – ran five miles and did some ab work — thanks to the little kid in the photo above who was cheering me on from the sidelines. There are ducks on board, to be sure.

I went to Big Chicken for the first of two breakfasts after working up quite an appetite. I have a feeling that Mardi Gras has more breakfast options than any other ship I’ve ever been on. The honey chicken biscuit is the sandwich shown above, and it is very delicious. I probably would have eaten two if it hadn’t been for the fact that I needed to save space for my second breakfast. I suppose I should tell you that what you’re going to see isn’t very appealing. However, you may be certain that no photographers were killed or eaten while filming this trip report.

Guy’s Burger Joint’s All American sandwich isn’t beautiful to eat, but it’s delicious. It’s the type of situation where all you can do is plunge in and eat like no one’s looking… which you kind of hope they aren’t, but don’t really care. It’s just that wonderful.

With our bellies full, it was time to go to Loft 19, the exclusive hideaway for Excel Suite guests and those who purchase a day or week-long ticket. A hot tub with a wonderful view is one of the amenities.

Because the Loft 19 area lacks a pool, I walked down one level to the Serenity section, swam in the pool there for a while, then returned to the Loft 19 hot tub. Not a terrible way to pass the time!

The Military Appreciation event would be held in the new Heroes Tribute Lounge, according to an early version of the week’s itinerary. On the one hand, this seems logical, considering that both the lounge and the event commemorate people who have served in the military.

But my concern was twofold: I’ve seen how many people often attend these events, and while Heroes has additional seating thanks to the nearby Guy’s Pig & Anchor, that area might be filled with people laughing and enjoying themselves, unaware of the more somber event taking place nearby.

But, thankfully, it was eventually relocated inside the theater, where, as you can see, a sizable audience turned up, including both veterans and people who appreciate all they’ve done for our nation.

The magnificent vistas at Grand Central when the wall of windows isn’t hidden by the screens used during the many events this space hosts at night are something I haven’t had a chance to show you yet.

We came to the atrium for a Q&A session with Brand Ambassador John Heald and Carnival Cruise Line President Christine Duffy, and while there was plenty of seating on the floor, we headed for seats much higher up in order to take in the views.

By the time the Q&A started, the space had, as you can see, really filled up. There was a lot of information presented as Duffy fielded questions about everything from new ships in the pipeline to the cruise line’s policies regarding vaccinations, which has obviously been a controversial topic over the past few months. As she’s said in the past, Duffy reiterated that as far as Carnival is concerned, it’s all about keeping passengers, crew and the ports they visit safe and at the moment, that means people need to be vaccinated.

A “Backyard Bash” celebration was held in the Summer Landing Zone that afternoon. Dancing, cornhole activities, and even square dancing were all part of the barnyard theme.

We had a look around before heading on to The Watering Hole, another new pub.

Aside from the amazing Planters Punch, one of the greatest things about this establishment is that it’s one of those wonderful pubs with a view. Come for a drink, but stay for the view of the ocean (and have another drink).

We stopped by for some pizza and then went to the arcade, which is something I rarely never do unless I’m on a cruise ship. I’m not sure why, but I seem to end myself at the arcade almost every time I’m on a cruise, particularly a Carnival ship.

They usually have one or two days throughout the week when you can play for a lower price, and you know how I keep an eye on the Hub App to see when that is. What can I say… pizza and arcade games? At heart, I’m a huge child.

Dinner was a little difficult, to be honest, since there were people waiting to eat almost everywhere. One of the issues, I believe, is that many guests are unaware of some of the ship’s dining modifications.

They are unaware that they may dine for free at Cucina Del Capitano, or that they can order from the same menu as the main dining room if they so choose. It’s not like you’ll go hungry, particularly with so many food options (many of which are complimentary), but there are a few bugs in the messaging system that need to be ironed out.

Finally, we stopped to Piazza Panini for some sandwiches. It was adequate, but not exceptional, and it kept the machine running for the remainder of the night.

You’ve heard me say it before: I’m not the kind of person who sits through a performance. Is there an exception? Comedy shows are quite popular. We went to the Punchliner Comedy Club to see Billy Washington’s performance because I like a good (or even average) comedian, and I’m happy we did. He was on fire and had the crowd in fits of laughter. He even pulled out a piano and integrated it into his performance at one point.

I intended to go to Brass Magnolia, but we were going to the theater to see the Family Feud performance, so we stopped by the Alchemy Bar for a couple of Cucumber Sunrises instead.

So, for a moment, let’s speak about Family Feud. Wouldn’t you think you were watching the TV program if you looked at the image above quickly? That’s how amazing the set is. They got it just right.

The show is entertaining and fast-paced. I guess how much fun it is depends on the families chosen to participate, but I’m sure they do a fantastic job of selecting individuals they know will deliver once they’re on stage. The intensity level for this is maintained high, which is essential for the audience, who feels like they are a part of the performance.

I was exhausted at this time and decided to call it a night.

Our first port visit is scheduled for tomorrow. I was going to add that this would be the first time Mardi Gras has visited San Juan, but isn’t that true of every port we visit during this cruise? 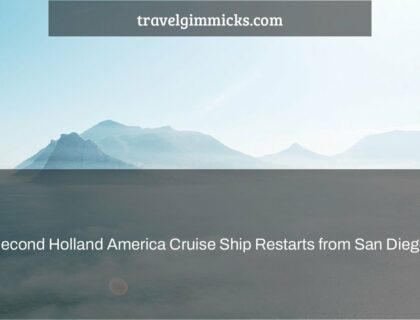